In the first part of this series, I explained how to start fuzzing Apache HTTP, how to implement custom mutators in AFL++, and how to define your own HTTP grammar.

In this second installment, I will focus on how to build our own custom ASAN interceptors in order to catch memory bugs when custom memory pools are implemented and also on how to intercept file system syscalls to detect logic errors in the target application.

Let’s get on with it!

ASAN maintains a shadow memory that tracks each byte in the real memory and can determine whether any given byte in memory is address-accessible or not. Bytes in invalid memory regions are called red zones or poisoned memory.

So, when you compile your program with Address Sanitizer, it instruments every memory access and prefixes it with a check. Then, ASAN will track the program and if the program tries to write to a non-valid memory region, ASAN will stop the execution and generate a diagnostics report. Otherwise, it will allow the program to continue. This allows you to detect all sorts of invalid memory accesses and memory mismanagement issues. 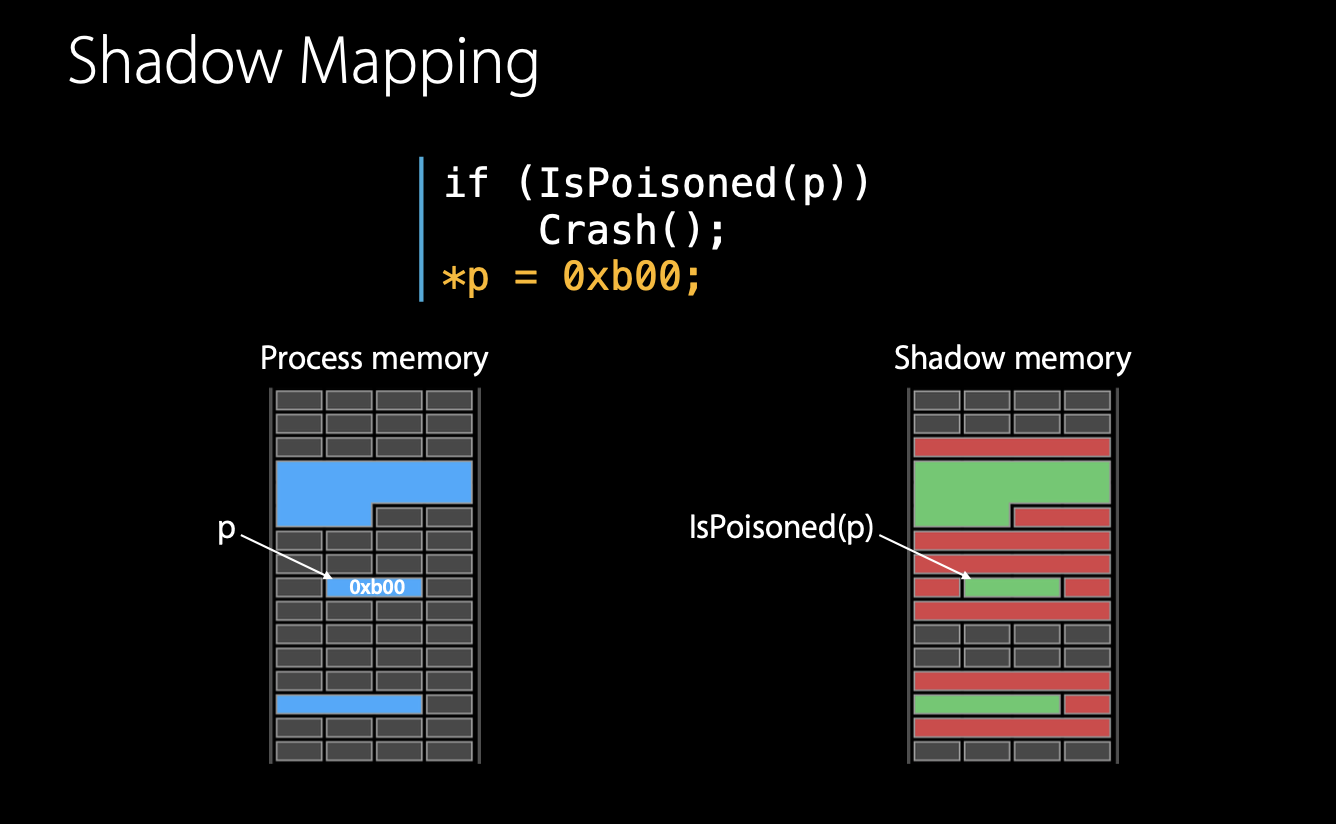 In some cases, having greater control over the poisoned memory can be useful for developers and security researchers. Think, for example, in the case of a custom function where you handle memory in a way that ASAN is not able to catch. That is why ASAN also provides a manual memory poisoning external API that allows the user to poison and unpoison a region of memory manually.

We can make use of these features through the external ASAN interface by including the ASAN library:

Then we can use the ASAN_POISON_MEMORY_REGION and ASAN_UNPOISON_MEMORY_REGION macros when we call malloc and free respectively. The typical workflow is to poison the entire memory region first, and then unpoison allocated chunks of memory leaving poisoned red zones between them.

This approach is relatively simple and easy to implement but suffers from “reimplementing the wheel” each time we target a new program. It would be great if we could simply intercept a certain group of functions, in the same way as ASAN does.

For that reason, I’m going to show another approach: custom interceptors

Let’s look at an example to get a better understanding.

Consider for example the following code snippet, where a call to apr_palloc was made in order to allocate memory:

In this case, the value of the second argument is 126 (in_size = 126) or, in other words, our aim is to allocate 126 bytes inside the g->apr_pool memory pool. These 126 bytes will be rounded up to 128 bytes due to memory alignment requirements. This much is clear.

Then, the program will add new nodes to this linked-list as additional space is needed. When the free space of a node is not enough to meet apr_palloc demand, then allocator_alloc function is called. This function will be responsible for creating a new node and adding it to the linked list. However, as we can see in the next picture, such an allocation size is always rounded up to MIN_ALLOC bytes. Therefore, each of these nodes will have a minimum size of MIN_ALLOC.

Later, a call to malloc is made inside this function with the aim of allocating new memory for this node. In the following picture you can observe how a malloc call with size=8192 is performed:

The end result is a total of 8192-126 = 8066 bytes marked as writable by ASAN when it is in fact not real allocated memory but rather free space in the node. So, a subsequent memcpy(np, source, 5000) call would lead to an out-of-bound write, overwriting the rest of the node’s memory. However, we wouldn’t see any ASAN alert message, which would cause us to miss memory corruption bugs even with ASAN enabled.

Errors like these can result in vulnerabilities such as the one I published a year ago in ProFTPD: CVE-2020-9273.

Next, I’m going to explain how to build LLVM sanitizers from the sources. This is needed in order to add our own custom ASAN interceptors to the ASAN library.

First you should know that LLVM sanitizer runtimes are part of what is known as the “compiler-rt” runtime libraries. In my case, I downloaded version 9.0.0 of compiler-rt sources because it was the version that I previously had installed in my Linux distro. You can download these sources from the following link: https://releases.llvm.org/9.0.0/compiler-rt-9.0.0.src.tar.xz

You can build it with:

After the compiler-rt build process is finished, you must add the next environmental variables to the Apache build process:

Finally, you need to set the environmental variable LD_LIBRARY_PATH as follows:

As we saw before, ASAN needs to intercept functions like malloc and free to track memory usage. This requires the runtime to be loaded first, prior to the library that exports these functions. For that reason, when we add the linker flag -fsanitize=address, the compiler sets libasan first in the symbol search lookup order.

If we inspect the code, we can see that the entry function is called __asan_init. This function in turn calls the AsanActivate and AsanInternal functions. It is in this second function that most of the initialization steps take place, and where InitializeAsanInterceptors is called. This last function is the most important for our purpose: 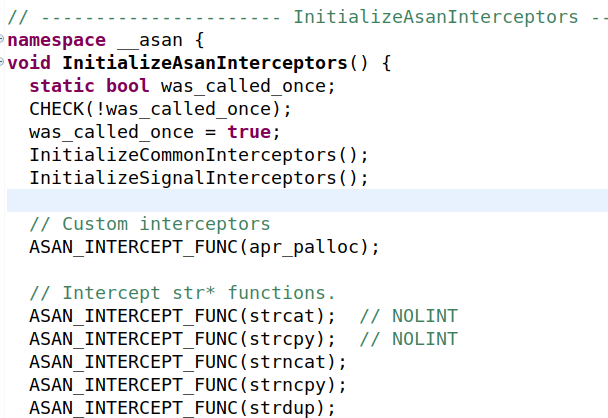 As shown above, there is an ASAN_INTERCEPT_FUNC call for each of the functions that ASAN intercepts by default. ASAN_INTERCEPT_FUNC is a macro which is translated into INTERCEPT_FUNCTION_LINUX_OR_FREEBSD on Linux systems. This macro ends up calling the InterceptFunction function which will perform all the actual function hooking logic.

Within this function, it calls the GetFuncAddr function and this, in turn, calls dlsym(). dlsym allows the program to retrieve the address where that symbol (intercepted function) is loaded into memory.

It later stores the address of this function into the ptr_to_real pointer.

So, to sum up, to define our own ASAN Interceptors, we need to perform the following steps:

Now, I will show a real example of how to intercept a function of the APR (Apache Portable Runtime) library.

As previously noted, Apache uses custom memory pools to improve management of program-dynamic memory. That is why, if we want to allocate memory inside a memory pool, we should invoke apr_palloc instead of malloc.

First of all, I will show my implementation of INTERCEPTOR(void*, apr_palloc, …): 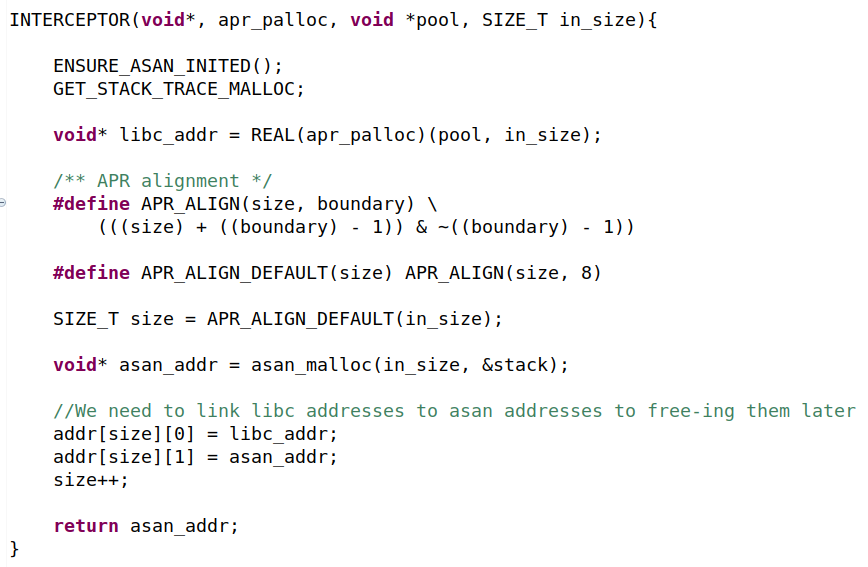 The ENSURE_ASAN_INITED() macro checks if ASAN has been previously initialized before continuing the execution. The GET_STACK_TRACE_MALLOC macro retrieves the current stack trace so that in case an exception is caught, it displays it in the ASAN report. As a general rule, we’re going to retrieve the stack trace in the interceptors as early as possible as we don’t want the stack trace to contain functions from ASAN internals.

Then, we call the original apr_palloc function using REAL(apr_palloc) in order to create all the internal structures for the memory pool. The apr_palloc function itself invokes the allocator_alloc function, which is responsible for allocating memory when it is needed. What we do is replace the malloc call (which is being intercepted by ASAN) by __libc_malloc. This enables us to avoid the unpoisoning of the whole memory of the node.

After the program returns from the apr_palloc function, we do the alignment of the “in_size” integer in the same way APR does. This will make both sizes the same, and just after that we will call asan_malloc to allocate a new memory block of size “in_size”. This new allocated memory will be handled by ASAN.

Finally, we will store both libc_malloc and asan_malloc memory addresses in an array, so we will be able to free the asan-malloced memory block when the node is destroyed.

Just as we have done with malloc, we may also change the calls to free() that are related to the freeing of the nodes. In our case, we are going to modify the allocator_free and apr_allocator_destroy functions. In addition, we will have to free the memory, which we previously allocated with asan_malloc. To that end, I traverse the “addr” array where the addresses have been stored and I free all the memory blocks linked to this node. Finally, I include a direct call to the free() function using the __libc_free(node) statement. 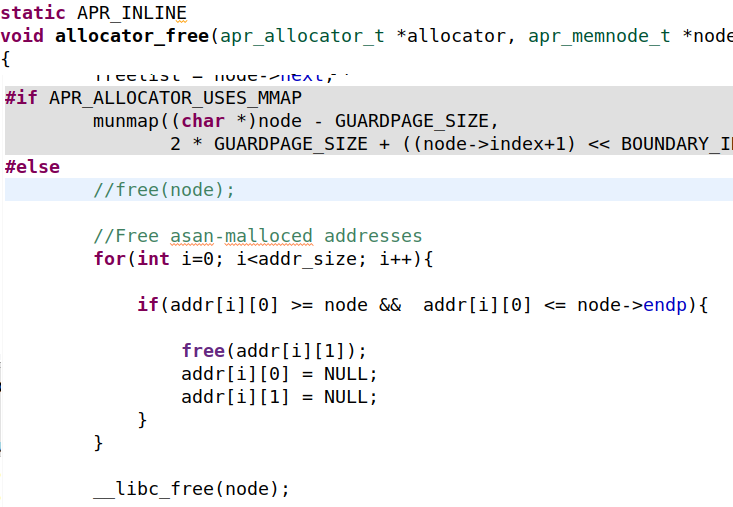 I use this approach because it’s simple and easy to explain, but it’s pretty inefficient as it implies to traverse the whole “addr” array. A better approach would be to store node addresses into an unique(vector) or std::set and to point each of these addresses to a linked-list of asan_malloc-ed addresses. 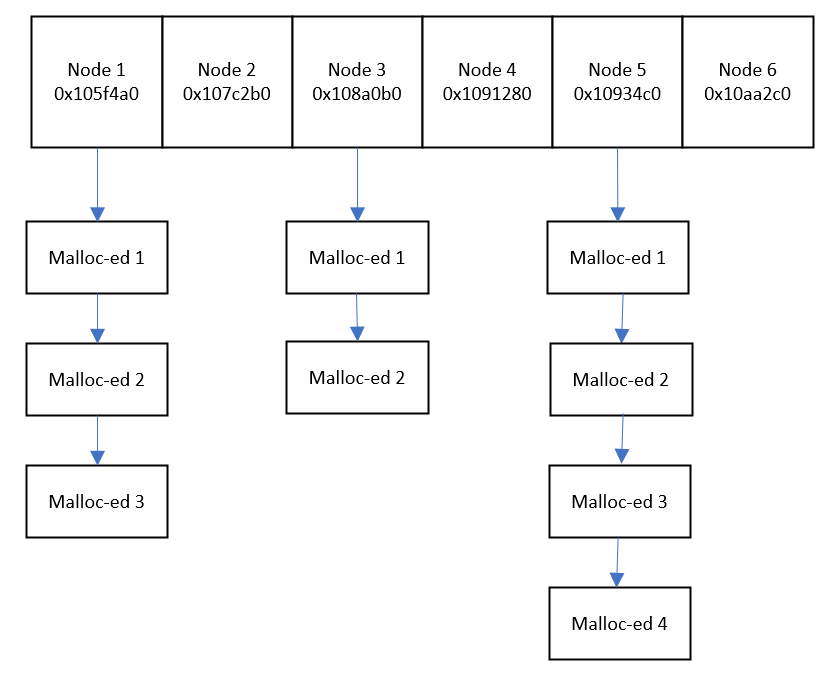 When we fuzz a file server such as a FTP server or HTTP server, we send multiple requests that will get translated into filesystem syscalls in the remote server (open(), write(), read(), etc.). This could trigger logic vulnerabilities related to file access permissions such as Access bypass, business flow bypass, etc.

In the majority of the cases, however, detecting such vulnerabilities using a fuzzer like AFL can be a complicated task. This is because this type of fuzzers are more oriented towards detecting memory management vulnerabilities (stack overflows, heap overflows, etc.). It is for this reason that we need to implement new detection methods to catch these vulnerabilities.

The following file monitor method is a basic approach based on intercepting and saving file system call info for later analysis. The main idea driving the analysis is to compare the filesystem calls with their high-level counterparts, and to check if invoked syscalls are actually what they are supposed to be, and that the call order and arguments are correct.

To illustrate this point, I’ll show an example with three different WebDav requests:

You can download the file that contains these requests in the following link.

First, I’m going to identify high-level functions involved in handling these HTTP methods. In the case of PUT, MOVE and DELETE these functions are respectively:

Then, I’m going to insert a call to the log_high function at the beginning of each function:

Likewise, we can insert an ENABLE_LOG = 0; at the end of each function. The log_high function code is as follows: 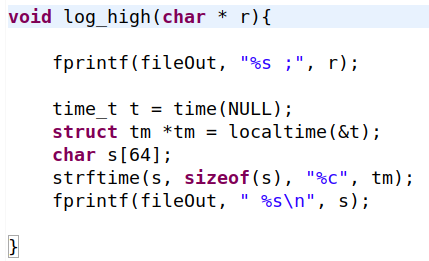 Now, just as we demonstrated in the previous section, we will use ASAN interception to intercept file system syscalls. In the case of Apache I’ve intercepted the following syscalls:

This is an example of the output file:

After we obtain our output file, we need to analyze it. In my case, I used Elasticsearch to perform a-posteriori analysis. How to perform the actual analysis is beyond the scope of this post, but I’ll share in another post how I have made use of Elasticsearch for my API log analysis in the near future. I will also explain how to perform a real-time analysis using AFL++.