In this post, I’ll share the results of the first part of my socket-based fuzzing research. I’ll cover my fuzzing analysis of three widely-used FTP servers as a practical example, and I’ll detail the vulnerabilities that resulted from this effort.

The choice of FTP protocol is based on the following reasons:

I ‘ll also include some tips on how to deal with any source code changes to be able to fuzz software that makes uses of sockets using AFL++.

To start, I made use of the SHODAN API to select the most relevant FTP servers from the options of available open source FTP servers. I selected the FTP servers that had the highest number of publicly-exposed instances:

As a result of this effort, I reported the following bugs:

When you want to fuzz software that uses sockets to obtain input, the first step to solving the problem generally involves making some source code changes to facilitate fuzzing. The fuzzing process is usually straightforward when the input is file based, as might be the case with image libraries such as libpng, libjpg, etc. In these cases, few or no changes to the targeted source code are required.

However, when dealing with networked, interactive servers (such as FTP servers), where the requests we send may cause all sorts of system state changes (uploads, downloads, parallel tasks, etc.), the process is not that simple.

A possible approach for such cases would be to make use of something like Preeny. Preeny is a set of preloaded libraries which help to simplify fuzzing and “pwning” tasks. Among other capabilities, Preeny allows you to de-socket software, i.e. redirecting socket data flow from/to stdin and stdout.

While it’s true that Preeny is a handy tool, its approach to de-socketing can remove the kind of granularity required to address the peculiarities of your fuzzing target. Every piece of software is unique, and we often want a high level of control over how and where to influence input and process state when fuzzing software to ensure we get the required amount of surface coverage. Because of this, I usually choose the manual source modification approach, which gives me greater flexibility in dealing with corner cases.

What follows are some practical tips to help you address common challenges when you start with socket based fuzzing, in the context of our FTP case study.

Our FTP fuzzing will mainly focus on the command channel, which is the channel we use for transmitting FTP commands and receiving command responses.

In this case, inputFile is the current AFL file ([input_path]/.cur_input) which we pass as a custom argument. 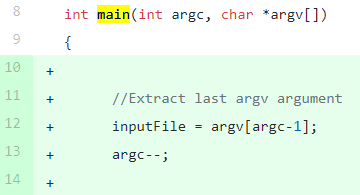 The AFL command line is as follows:

These changes mean that we cannot call certain network API functions such as getsockname and getnameinfo (we’d get an ENOTSOCK error). So I comment out these function calls and hard-code their associated result variables instead: 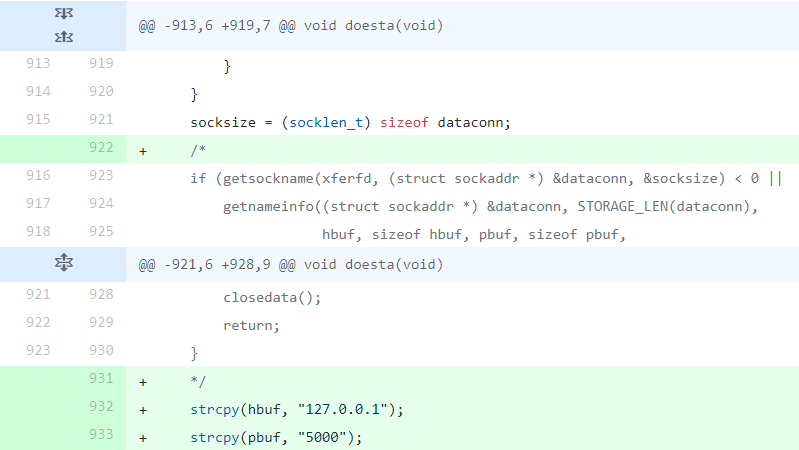 We also can’t use network fd specific operations such as send(3) so we have to move to a lower level non-network specific API such as write(2):

Up to this point we’ve only dealt with the command channel, but we also need to ensure that the data channel receives data so that uploads and downloads can function when we fuzz.

For the file upload case I use a call to getrandom(2) to return random file data:

Because we want to keep using stdin and stderr, we must avoid closing STDOUT_FILENO(1) and STDERR_FILENO(2) in the data channel code:

We also need to modify the reading/write functions that depend on external libraries, as is the case with OpenSSL:

Because we want to maximize the chances of finding a vulnerability, it’s helpful to delete certain system calls such as unlink(2). This will prevent the fuzzer from deleting files by accident.

Likewise, we delete any calls to rmdir(2) (directory deletion function in Linux):

Since the fuzzer may end up modifying folder permissions, it’s important to periodically restore the original permissions. This way we avoid the fuzzer getting stuck:

Analyzing multiple event combinations will require the modification of event handling functions. For example, below I’ve replaced the call to poll by a call to FUZZ_poll: 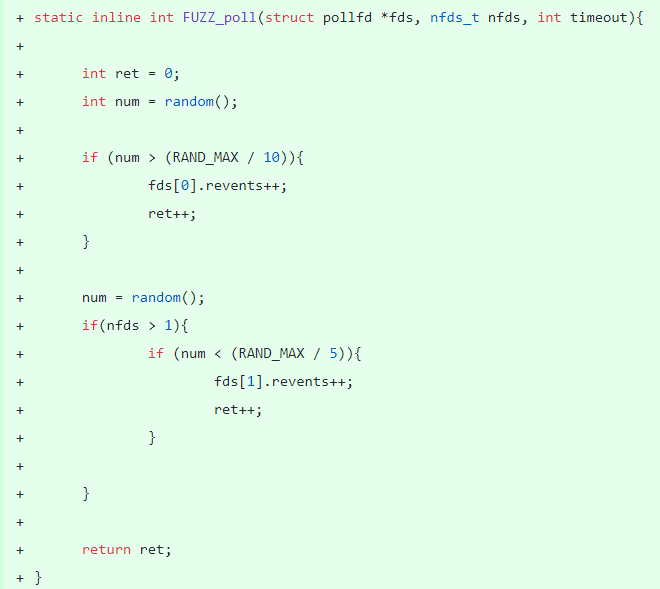 You often want to delete or replace moot event polling code altogether since it doesn’t contribute to our surface coverage and just introduces unneeded complexity. In the following example, we patch out a moot select(2) call to that end.

We must also take into account any situation where concurrent events between the data channel and the command channel get interleaved. CVE-2020-9273 is a good example of this occurring. This bug is triggered by sending a specific command sequence to the command channel while a data transfer is also running. To deal with that situation, I’ve built a small fuzzer function fuzzer_5tc2 that feeds strings from the provided dictionary to the fuzzer:

In some cases this functionality is already offered by the software itself. For example, here’s a look at the nofork option in ProFTPd:

In the absence of any such options, to avoid fork(2), we just delete the actual fork(2) invocation and hardcode a return value of 0 which will continue down the intended child process execution path:

Once the user is logged in, the FTP server usually calls chroot(2) to change the effective root directory for the process. This presents us with some obstacles as it may prevent our target process from accessing data we want it to be able to access.

For example, the child process path may drop privileges and we may no longer be able to access the AFL .cur_input file. To address this, the following is a simple example in which we just set the file world readable/writable/executable:

In order to improve the AFL stability score, we need to minimize randomness in our program. That way, the fuzzer will always cover the same execution code paths for the same inputs.

In the following example, we neuter the random number generation and return a repeatable RNG state: 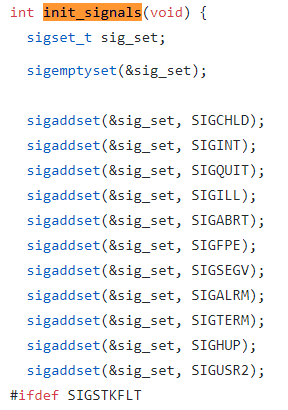 Comment out calls to alarm(2) function can also be helpful:

Timing is critical, even more so when we talk about fuzzing. Any unneeded delays must be minimized in the application to increase fuzzing speed. In the following example, we make timing intervals smaller where possible and remove unneeded calls to sleep(3) or usleep(3):

Likewise, often when fuzzing, you’ll notice that small changes in logic flow can speed up the fuzzing process tremendously. For example, as the number of generated files increases, the execution time of the listdir command grew, so I chose to only execute listdir once every N times:

As a final point, I want to highlight an aspect that’s often overlooked: FUZZING IS NOT A FULLY AUTOMATED PROCESS.

Effective fuzzing requires detailed knowledge of the internals of the software we want to analyze, as well as an effective strategy for achieving good code coverage in all possible execution scenarios.

For example, to effectively fuzz the FTP servers we tackled in this case study, we had to modify nearly 1,500 lines of code:

The process of integrating the targeted code and the fuzzer, is a task that requires significant effort and is critical for obtaining successful results. It’s a highly sought-after goal in the fuzzing community as evidenced by the fact that rewards are quite high, such as Google offering up to $20.000 for integrating security-critical projects with OSS-Fuzz.

This should inspire developers to facilitate fuzzing, as well as inspire the creation of fuzzing harnesses that ease the integration with AFL and LibFuzzer. As my colleague Kevin recently wrote, ”the concept of anti-fuzzing is just ridiculous”. Please, avoid security by obscurity.

As far as fuzzing input corpus is concerned for this project, my main goal was to achieve full edge coverage for all FTP commands, as well as a diverse combination of execution scenarios to obtain a reasonably complete path coverage. 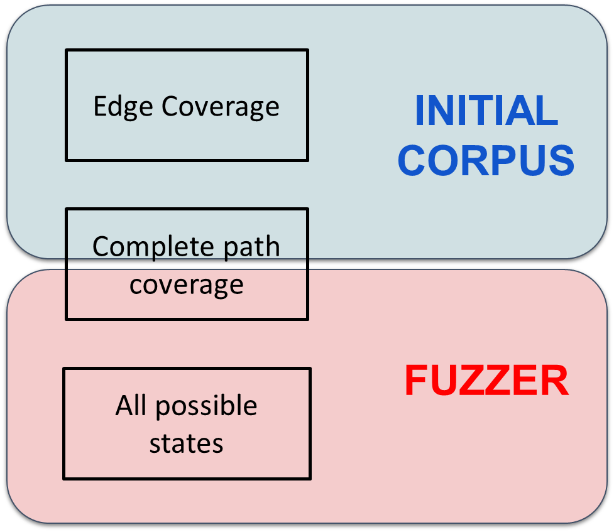 Check out the input corpus I’ve used for PureFTPd. And you can also find here an example of a simple FTP fuzzing dictionary.

In this section, I’ll detail some of the more interesting vulnerabilities I found as a result of this fuzzing effort.

This bug allows you to corrupt the ProFTPd memory pool by sending specific data to the command channel while a transfer is active in the data channel. The simplest example would be to send the interrupt character Ctrl+c. This results in a Use-After-Free bug in ProFTPd memory pools.

The ProFTPd memory pools implementation is based on Apache HTTP Server and is structured in a hierarchical way (longer to shorter lifetime).

Internally, each pool is structured as a linked-list of resources and these resources are freed automatically when the pool is destroyed.

In the following example, we can see the pool is damaged since the outlined memory values are not valid memory addresses:

The severity of this bug is considerable given that:

This bug is an OOB-Read vulnerability that affects the pure_strcmp function in Pure-FTPd. As shown in the next code snippet, the bug is due to the fact that s1 and s2 strings can be different sizes. 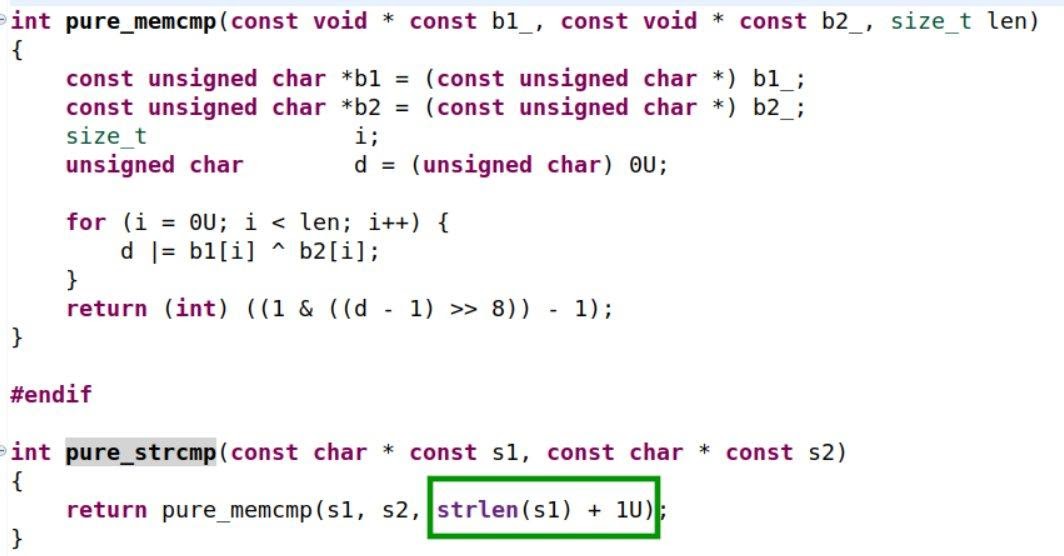 Therefore, if the length of s1 is greater than s2 then the for loop will do len-1 iterations, where len-1 > strlen(s2). As a result, the program accesses memory that’s outside of the boundaries of the s2 array.

This issue may allow attackers to leak sensitive information from PureFTPd process memory or crash the PureFTPD process itself.

In this case, we found an uninitialized pointer vulnerability that could also result in an Out-of-Bounds read.

The source of the problem comes from the init_aliases function in diraliases.c. In this function, the next member of the last item in the linked list is not set to NULL. 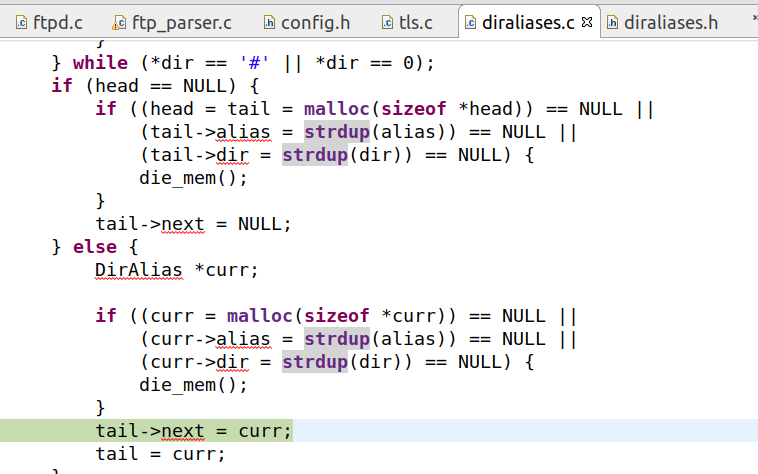 As a result, when the lookup_alias(const char *alias) or print_aliases(void) functions are called, they fail to correctly detect the end of the linked-list and try to access a non-existent list member. 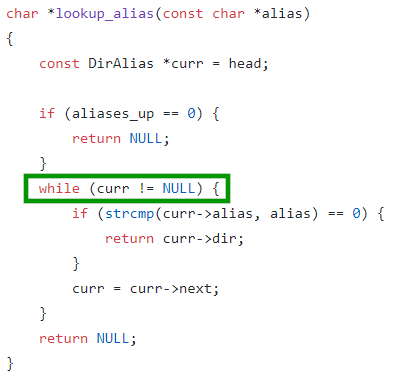 The severity of this vulnerability depends on the underlying operating system and whether or not it zeroes out the backing memory by default, since that affects the default values of the curr variable.

I want to thank the developers of PureFTPd, BFTPd, and ProFTPD for their close collaboration on addressing these bugs. They fixed these issues in record time and it was a pleasure working with them!

Take a look at the tools and references I used throughout this post for further reading: