Type confusion is a memory-corruption vulnerability that is relatively common in script interpreters such as ChakraCore (the JavaScript engine in Microsoft’s Edge browser) and Ghostscript. It is a powerful type of bug that can be relatively easy to exploit. I’ve written a separate post on how one of these type confusion issues in Ghostscript (CVE-2018-19134) can be turned into a remote code execution vulnerability.

I found these three vulnerabilities using our query technology for variant analysis. Starting with a series of vulnerabilities that Tavis Ormandy discovered between 2016 and 2018 (see next section), I developed a query and ran it over the Ghostscript source code to find variants of those vulnerabilities. The techniques described in this blog post rely heavily on the CodeQL for Eclipse plugin to run queries over source code. You can use the code described in this blog post to query this snapshot of the Ghostscript code. You can also find the relevant queries and libraries are under the semmle-security-cpp/(lib|queries)/ghostscript directories in our GitHub repository: https://github.com/Semmle/SecurityQueries.

Type confusion issues in Ghostscript are not new. In 2016, Google Project Zero member Tavis Ormandy reported a number of vulnerabilities in Ghostscript, one of which is caused by type confusion. This bug is particularly powerful as it allows you to call an arbitrary function, provided that the function’s address is known. Combining it with another arbitrary-file-read vulnerability that he found, he was able to read function addresses from /proc/self/maps, which makes the vulnerability trivially exploitable.

Another (rather infamous) type confusion is “GhostButt”, which was discovered in 2017 (CVE-2017-8291) and allegedly exploited in the wild. This vulnerability can be cleverly exploited to overwrite a variable that controls the sandbox environment (the LockSafetyParams) to achieve shell command execution. A good write-up can be found here (In Chinese, but Google Translate gives you the general idea).

In August 2018, Tavis Ormandy again reported a large number of critical vulnerabilities in Ghostscript, which included three type confusions in the first batch of disclosures.

The member tas contains the information of the type, as well as its accessibility (read-only, write-only, etc.). The member value is a union which stores the object’s internal data. This essentially stores an 8-byte integer that gets interpreted either as a pointer or a number, depending on the type of the object. It is therefore important to check the actual type of the object before doing anything with the data in value, otherwise, an integer value may be treated as a pointer and get dereferenced (allowing access to arbitrary memory), or a pointer value may be treated as an integer (potentially leaking the addresses of arbitrary objects).

In Ghostscript, type checking is done by various macros, like check_type and r_has_type. Types are also checked with switch statements that discriminate according to the type of a ref_s, as it is done here.. Every PostScript object must be correctly type checked before it is used, but these objects can be very complex. For or example, you may have a dictionary storing an array that stores a dictionary and so on. This makes it more difficult to ensure that all objects have been checked correctly; for example:

Type confusion issues can be modeled as a dataflow problem. After the serious auditing done by Tavis Ormandy and others, any type confusion bugs that are left are probably rather hard for a human to find by hand. So the goal here is to look for type confusions that are buried deep behind a sequence of fetches, like the in example above, as these are less likely to have been discovered.

As with all dataflow problems, let me first identify the source, sink and sanitizer(s).

Conditions 1. and 2. are relatively easy. Condition 3. is more difficult. I’ll now describe how to construct such a query. The resulting code can be found in our GitHub repository.

Postscript is a stack language, and objects defined in a script are pushed to the operand stack. Ghostscript functions often start like this:

Here the getTarget method gives me the Field of a FieldAccess, so the above simply says that a FieldAccess fa is an OSP access if it is a chain of field accesses of the form op_stack.stack.p. The dataflow source is then:

The sink here is an access to a field in the union v in the value field of a ref_s type. First, let’s define a query that finds accesses to the type ref_s, which takes into account both direct accesses and accesses taken via the address of a variable:

I’ve included a method getVariable to help keep track of the variable that gets accessed.

Now let’s define a sink as an expression of the form obj->value.x:

We added a getRef method to keep track of the ref_s object whose internal data is being accessed. We’ll use this later in our type-check dataflow query.

Now for the sanitizer. As explained before, type checking is done by various macros like r_has_type, check_type etc. Ultimately, these macros use the field type_attrs in the struct tas of ref_s to perform type checking. So we can consider an expression like obj->tas.type_attrs == some_type as a type check:

As mentioned above, another common pattern used for checking type is to use the switch statement, for example:

This can be modeled with CodeQL as:

Here, getControllingExpr() of a SwitchStatement gives the switch(type) statement and we are assuming that if the field access to type_attrs is inside the control statement, then it probably is a type check. With this in mind, we can now define our sanitizer, which says that if a DataFlow::Node can only be reached via either a SwitchCheck or a TypeCheck, then the Node is considered sanitized.

Note that we use the dominates predicate from the standard CodeQL library to indicate the expression represented by node can only be reached via tc, which is either a TypeCheck or a SwitchCheck. The line tc.getRef().isEquivalent(e) ensures that tc is checking the same variable as the one that is accessed by node.

Ghostscript has various methods for fetching components inside collection structures such as arrays and dictionaries. These methods usually pass the input collection as an argument and use an output argument to store the result. For example, take thearray_get method:

This sets out to the value of the first element of the arr array. (Note arr is a PostScript array, not a C array — its C type is ref.)

If arr comes from PostScript (tainted), then any access to out should also be tainted. We can perform tracking of taint through such collections by overriding the isAdditionalFlowStep predicate. Given that there are various methods like dict_find, dict_find_string, array_get etc. that we’d like to include, and potentially adding new methods, it makes sense to first create a base class with CodeQL that captures the essence of these methods:

Here we define an abstract base class with CodeQL, which has two methods, getInput and getOutput that will give me the indices to the input and output arguments in various fetching methods. Subclasses can override these methods to provide the exact argument index. For example, for the array_get method:

We can now override the isAdditionalFlowStep predicate to find paths where tainted data can flow from the input argument to the output:

The output node is similar, although we taint all accesses to the output variable:

Finally, we restrict this edge to the case where both input and output are in the same function to avoid some global variable that accidentally got tainted, which could give a large number of bogus results:

Counting only the relevant checks

Let’s take a step back and recall the bug pattern we are trying to find:

In other words, the initial check is unimportant: we’re interested in scenarios in which a check is not performed after a fetch. 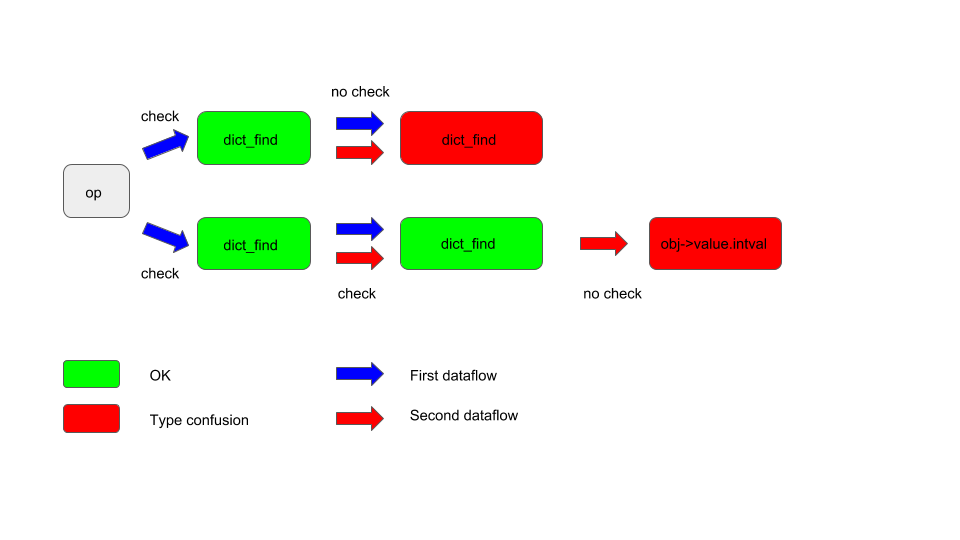 With this in mind, the first dataflow configuration should have:

This gives me the following configuration:

The second dataflow configuration now starts from the sinks of the first configuration and ends at a TypeFieldAccess when the internal structure of a ref is accessed. It should also sanitize against type checking, but should not track across FetchMethod.

Running the query gives 49 results; that easily allows for manual inspection. A quick run through the results shows that some of them are not valid because the TypeFieldAccess is preceded by a function call that also checks its argument type. For example, one of the results in zimage3.c goes into pixel_image_params:

This kind of problem is not too difficult to filter out. After taking these type checking functions into account, we arrive at the final query. Running this query against the ghostscript snapshot gives 15 results.

Let’s take a look at the results. I’ll use the file name in the Resource column to identify these results.

Some of these are very interesting. In particular, consider the result on line 292:

This is especially interesting, because it’s located within 2 lines from another type confusion reported by Tavis Ormandy in August 2018! A minimal PoC that crashes Ghostscript is:

There’s a second result in zcolor.c which is in fact a piece of duplicate code. That was patched at the same time.

This one requires the -dJBIG2 flag to be turned on to allow JBig2 decoding. A minimal crashing PoC is:

I was actually experimenting with a different query when I found another type confusion vulnerability here, where type of pnameval was not checked before ->values.bytes was used. It’s not at all obvious that ICCDict originates from PostScript. A minimal PoC is:

I reported this as bug 700169 and it was assigned CVE-2018-19476. The fix also fixed the two results flagged up by my query, so there was no need to report these separately.

There are quite a few query results in zbfont.c, although most of them are related to the lack of type checking in the dictionary variable porigfont. It’s therefore easy to resolve all results with a single small change. After I reported CVE-2018-19476, Ken Sharp from Artifex’ Ghostscript team also started adding type checks in various places. These checks resolved all results in zbfont.c, so there was no need to report these. Although he originally did not intend to port the patch to 9.26 as they were preparing for the release, I’ve since shown him a minimal PoC that triggered these bugs:

Both of these were patched in Ghostscript 9.26.

The rest of the query results are mostly in code that cannot be reached from -dSAFER, alongside a single FP in ibnum.c.

In this post I’ve shown how I performed variant analysis on Ghostscript, using our query technology. This effort resulted in the discovery of 6 new type confusions (4 fixed by vendor, 2 reported). What’s more is that the CodeQL library that I built for Ghostscript can now be reused and extended to find other security issues in Ghostscript. 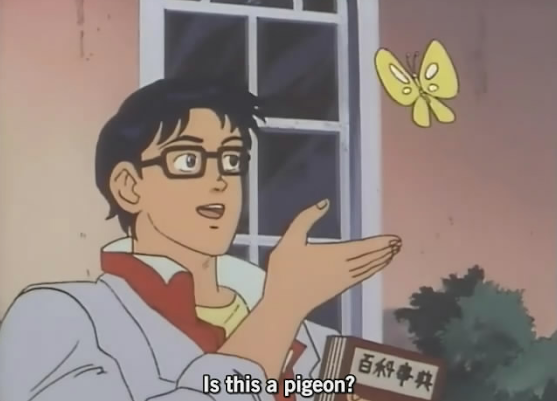