In this post I’ll give details of how to construct the exploit for CVE-2018-11776. I’ll first go through the various mitigation measures that the Struts security team had put in place to limit the power of OGNL and also the techniques to bypass them. I’ll focus on general improvements in the SecurityMemberAccess class, which is like a security manager that decides what OGNL is allowed to do, as well as the limitations in the OGNL execution environment. I will omit the more specific measures that were introduced to protect specific components, such as improvements in the whitelist in the ParametersInterceptor.

A brief history of OGNL exploits in Struts

Before describing how to attack CVE-2018-11776, I want to give some background and to introduce some concepts that are needed to understand OGNL exploits. I’ll be using the double evaluation bug in TextArea to illustrate the exploits, as it makes the TextArea into a rather handy OGNL display (maybe it’s a feature). First let’s go through some basic concepts in OGNL.

OGNL in Struts runs in an environment in which various global objects are accessible by using the # sign. This document shows some of the objects that are accessible. As well as the objects listed there, there are also two very important objects for exploit construction. The first is _memberAccess, which is a SecurityMemberAccess object used for controlling what OGNL can do, and the other is context, which is the context map that allows access to many more objects, many of which are useful for exploit construction. Having access to _memberAccess very much defeats the whole purpose of SecurityMemberAccess as its settings can then be easily modified. For example, many early exploits began with

which changes the settings in _memberAccess. The following

will then pop a calculator.

As explained in the previous section, Struts uses _memberAccess to control what is allowed in OGNL. Initially, this used a few Boolean variables (allowPrivateAccess, allowProtectedAccess, allowPackageProtectedAccess and allowStaticMethodAccess) to provide coarse control of how OGNL can access methods and members of Java classes. By default, all of these are set to false. In later versions, there are also three blacklists (excludedClasses, excludedPackageNames and excludedPackageNamePatterns) that are used to deny access for specific classes and packages.

No static method, but allow arbitrary constructor (before 2.3.20)

Be default, _memberAccess is configured to prevent access of static, private and protected methods. However, before 2.3.14.1, this could be easily bypassed by fetching #_memberAccess and changing these settings. Many exploits involved doing this, For example:

In 2.3.14.1 and later, allowStaticMethodAccess became final and could no longer be changed. However, as _memberAccess also allows construction of arbitrary classes and access to their public methods, it is actually not necessary to change any settings in _memberAccess at all to execute arbitrary code:

this works before 2.3.29 and this trick still forms an important part of more recent exploits.

Finally, _memberAccess is gone, so none of these simple tricks work any more. On top of that, the classes ognl.MemberAccess and ognl.DefaultMemberAccess are included in the blacklist. To see how to bypass this, let’s take a look at a simplified version of the payload for S2-045:

First thing to notice about this exploit is that it does not even try to reach _memberAccess. Instead, it tries to get an instance of OgnlUtil and clear out its excluded classes blacklist. So how does it work? The exploit first gets a Container from the context map, which contains the following keys:

The key com.opensymphony.xwork2.ActionContext.container gives me an instance of a Container in the OGNL execution environment.

The getInstance method then tries to create an instance of the class OgnlUtil, but because it is a singleton, it returns the existing global instance.

To see how the excludedClasses in the global OgnlUtil object is related to that of the _memberAccess object, let’s take a look at how _memberAccess is initialized.

As we can see from the example below, securityMemberAccess here (last line) is the same as _memberAccess(first line). 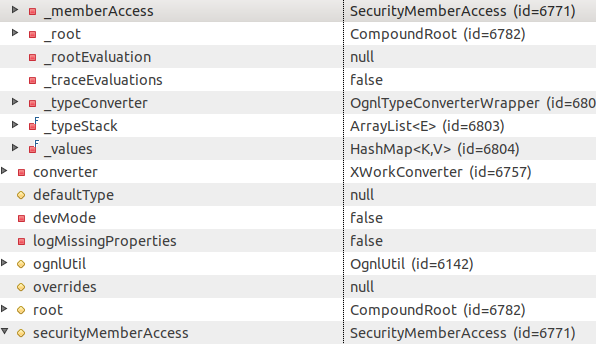 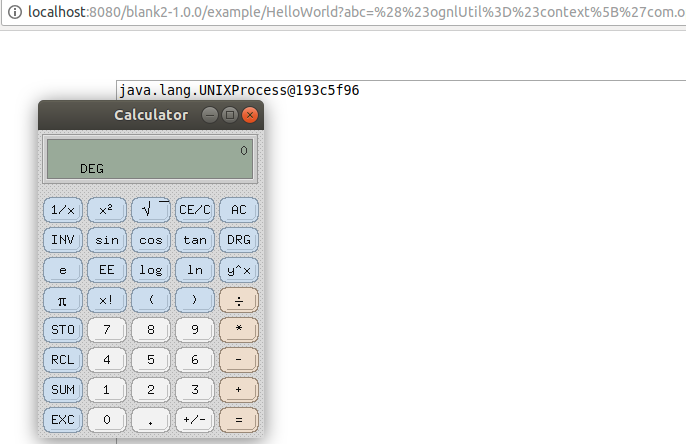 I will now explain how to bypass the mitigation in 2.5.16 and attack CVE-2018-11776. Let’s first take a look at the publicly available exploit for this since day 2 of the disclosure. There are different versions, but they all roughly go like:

From the previous section, readers should be able to find at least two reasons why this won’t work for 2.5.16 and identify the exact version in which it stopped working (hint: none of the 2.5.x). This is actually good news as it gave people plenty of time to upgrade and hopefully also prevented large-scale exploits from happening.

Having seen the incremental OGNL mitigation improvements, the natural starting point of an exploit would be the most recent one that worked, which is this one:

This, however would not work in 2.5.16 due to other improvements that were introduced. First, access to context is removed in 2.5.13 and also the excludedClasses etc. blacklists became immutable after 2.5.10.

The value of struts.valueStack stands out, with OgnlValueStack as its type. If I want to get back to the context map used by OGNL, then something of type OgnlValueStack seem like a very good candidate. Indeed, there is a method called getContext which turns out to do exactly what it says on the tin and gives us the context map. So we can now modify the previous exploit into this:

This, however, still won’t work because excludedClasses and excludedPackageNames are now both immutable:

Unfortunately, these blacklists aren’t really immutable as such, because you can modify them with the setters.

This, however, still doesn’t work. The excludedClasses set is cleared in ognlUtil:

How does that work?! Remember that _memberAccess is a transient object that is created during the creating of a new ActionContext when a request comes in. Every time a new ActionContext is created by the createActionContext method, the setOgnlUtil method is called to create _memberAccess using the excludedClasses, excludedPackageNames etc. blacklists from the global ognlUtil. So by resending the request, the newly created _memberAccess will have its blacklisted classes and packages emptied, allowing us to execute arbitrary code. Tidying up the payload, I ended with these two payloads. The first one empties the excludedClasses and excludedPackageNames blacklists

and the second one disarms _memberAccess and executes arbitrary code.

Sending these two, one after another, allows me to execute arbitrary code with CVE-2018-11776.

Thanks to Kevin Backhouse, a fully working PoC for CVE-2018-11776 up to 2.5.16 is available here with a docker image built from scratch so that it is clear which version of Struts it is using.